The Recreational Pilot Permit (RPP) is designed for people who want to complete their training in the shortest timeframe in order to fly small aircraft with a maximum of one passenger.

The RPP differs from the Private Pilot Licence in that it is only a permit, not a licence. As such, there are some very specific limitations:

The permit only allows for flying single-engine aircraft with up to four seats, but only with one passenger on board at any given time. The permit holder is also restricted to flying during daylight hours and only in Canada, not the United States or anywhere else. As it is only a permit, you can not add any ratings to it (night, VFR-OTT, Multi Engine, IFR). There is also no requirement for ground school and the flight test does not have as many items on it.

Transport Canada has said they may allow credit for some RPP time towards a Private Pilot Licence if you decide to carry on, but it is done on a case-by-case basis without any guarantees.

You can start your training before completing your medical, but we suggest you do the medical first to make sure there are no issues that would preclude you from holding the Student Pilot Permit or actual permit, licence or rating once you are done.

In the interest of safety, we encourage students to take our PPL ground school.

Expanded explanations of the RPP prerequisites and training requirements can be found at the Transport Canada web site Here. 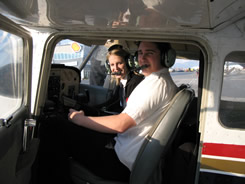