WHY KELOWNA YOU ASK?

The airspace around Kelowna International Airport is busy enough to provide the necessary challenges related to becoming a good pilot, but without having to wait for slot times or fight for safe airspace to practice maneuvers. Multiple, uncongested training areas exist within ten minutes of flying time, and because of our excellent relationship with ATC, we can even conduct training right in the control zone!

Kelowna is at the centre of the Okanagan Valley, surrounded by farms, orchards, lakes, hills, mountains and plateaus. The different geographical areas provide for some of the most unique training available in North America. Our students spend time flying in mountain valleys, visiting the Rocky Mountains, travelling out over the Canadian Prairies and exploring the coast of British Columbia running along the Pacific Ocean.

Kelowna is home to the Kelowna International Airport. The airport is busy enough to challenge our students and let them become used to a controlled airport with many different operations and aircraft, but quiet enough to prevent training delays. Just to the north is a completely uncontrolled airport in the city of Vernon, a partially controlled airport to the south in Penticton, and many other small strips in the area which allow for exposure to every level of controlled and uncontrolled environment a pilot might encounter in his or her career.

Kelowna also provides exposure to all four seasons when it comes to our weather. Our winter allows students to learn the challenges of operating in colder enviroments with snow and fog, but it's short enough as a season that it doesn't hamper our ability to finish training in a timely fashion. The wet spring season, hot, dry summer and cool fall finish off exposure to all possible seasons. Our Meteorology program was developed by a retired Environment Canada meteorologist who helped create and still updates much of the actual weather documentation used by NavCanada and pilots today.

Kelowna is generally known as one of the most beautiful places in Canada, with many activities for those who have time to enjoy them. Vineyards and wineries abound, amongst dozens of golf courses, lakes with beautiful beaches, and some of the best skiing in the world. Check out the video at the top right side of this page.

On August 6, 1969 a sonic boom from a nearby air show produced an expensive broken glass bill of a quarter million dollars and at least 6 people were injured. The incident was caused by a member of America's Blue Angels during a practice routine for the Kelowna Regatta festival; he accidentally went through the sound barrier while flying too low. 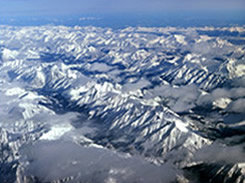 And a whole lot of fun!